A genetic catastrophe has left the young in charge of a fallen world. Crumbling cities are organised into the School System run by Head Boy, Mason Shields. Adults, lost and alone, wander Subarbaria whilst the old are herded into desolate compounds. A brutal murder in one such compound is witnessed by two teenagers, Joshwa and Mree, who become both hunted and hunters, forced to battle powerful, ruthless enemies. Can they defeat the undefeatable and save humanity?

“Cool World” is an unusual, gripping and thought provoking story with challenging ideas sure to get readers discussing the world in which they live and what the future might hold.

Contains mature themes and scenes. Recommended ages 12 and above. Not suitable for younger readers. 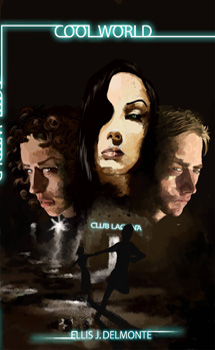 The first thing was to free the ex-Heads of Houses, or at least some of them, and form a common purpose. Then they had to let the city know exactly what had happened because ignorance was not bliss.