These magical tales are set in the liminal space of the forest where nothing is quite what it seems.

Shape-shifting and trickery lurk behind every tree and the figures we glimpse through the mist are mutable and indeterminate.

A lost ship drifts across the treetops, Mallow Musk gives birth to a pair of shoes, The Grey Girl lures children into the woods and Pickapple plays his trickster treats, but back at the crossroads, one secret remains. 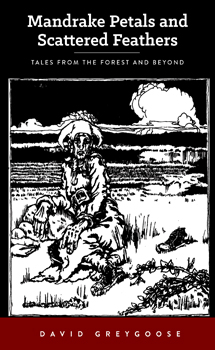 She walked back between the brooding trees, the sky bruised and aching. She could feel a rain that wanted to fall, she could hear a dark rumble of thunder, distant, calling as she ran on.